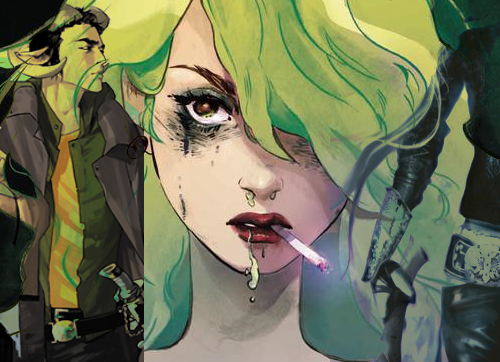 Today I bring you… (drumroll please) the wonderful Sophie Johnson. I’ve known Sophie for a couple of years now. We met through our university courses, and I knew she’d have some interesting insights and knowledge to impart. While she’s often considered as “that comic book person” in her close circles, Sophie is much more than that. She’s dedicated to her writing more than anything, so I wanted to know what she does it for, what it’s all about, and what makes her tick.

(Bonus points for those of you who can name all three of the series above, which are some of Sophie’s favourites).

Hi, I’m Sophie. I used to write under a pseudonym, but it lost meaning for me… I stopped using it because a friend and I had come up with it together but it lost its meaning. So I want a different one in the future. So at the minute I’m publishing under my own name, but probably in the future I’ll be writing under a pseudonym. I’m between names right now. I’m from West Yorkshire and I’m doing my MA in Creative Writing at the University of Huddersfield. I took a year out after my BA in English Literature and Creative Writing.

Probably since I was about 8… but proper stories since I was 10. For me it’s like a compulsion to get things out of my head. I think it’s natural, like breathing. It’s a part of my life, and it’s very therapeutic for me. It’s a source of comfort… like a solid focus amongst everything else that’s going on.

Everything – lots and lots of video games. People are sometimes surprised when I say that, because they associate writers with the age old dusty books etc. but to me, everything is a narrative. Lots of people think video games don’t have stories, but if you’ve ever played any, you’ll know that’s not true. I play at least half an hour of video games every day. I also always listen to music when I write. I can’t not write to music. And most of my hobbies revolve around stories or telling stories.

Music really helps me with scenes, and it usually becomes part of the writing, too. With the novel I’ve just submitted, I have an actual soundtrack. Every song has a place where it fits into the novel. When I’m reading, too, if I’m reading a tragic scene I can’t just be listening to like, say, Britney Spears. Music is evocative and epic orchestral stuff is great.

As long as my novel comes out and I get a good fan following, I’ll be happy. As long as I can live off my writing and make a career out of it. I’d love to have a Tumblr where I get asks about my books and writing every day. A reasonable popularity is my aspiration. I’m not really fussed for adaptations, films, whatever. Sure, that’d be nice, but it’s not my goal.

Well, I just finished my first novel where I was happy enough with it to submit to agents. But I’m working on a separate fantasy novel, a sequel to the one I’ve just finished, and the project for my MA, which is entirely different.

A little bit. I try not to, though – the ideas are mostly already in my head. Fantasy for me doesn’t really need much research. Sometimes you can get too bogged down with it [research].

Fantasy, but I love YA too. It’s not for teenagers, you know most readers of YA are 20+? I think it’s natural for genres to blend together. There’s definitely unintentional crossover of genres in my work. There’s elements of psychological thrillers and dystopias in some of the stuff I’ve written.

I’d definitely say TV. You look at things like Game of Thrones – there’s so much more money behind it, being invested in it. You also have more time to play around with. It’s not rushed. I think that the way stories are constructed – with beats and scenes – it all lends itself to a better match with TV. There’s more time constraints with film, trying to cram everything into 2 hours.

I adapted Stephen King’s writing schedule. I get up, sort myself out, and write in the morning. I do this for about 2 hours and then have a break. I’ll take a walk outside every day. Then I’ll spend my afternoon reading. Stephen King advises all writers to read, read, read so much, and it is important. If you’re in the craft and you know the craft you should want to do this and put as much time into both as you can. I treat it like a 9-5 job. Because of my disability, I can’t have a job, but I see the positives in this. I’ve been given the opportunity to spend the majority of my time doing what I love and what I’m passionate about.

A little bit of both. I always know where I’m going – what my beginning and end are. I have a couple of scenes in my head. The rest is generally seeing how it goes. Planning too much takes away the fun. A tight knit story is also a nightmare to edit. It’s like a house of cards. You take away one thing and it all falls down. Whereas the way I write, it’s like building it up brick by brick. I had one piece of work where I had to take out an entire plot line and I spent a long, long time finding all the parts of this plotline and taking them out.

Do exactly what you want to. Even if it’s weird or been done before. Don’t try to emulate other writers. It’s more authentic when you just do your own thing.

It’s going to be hard but it’ll be worth it. Don’t stop writing. People sometimes see the dream of ‘being a writer’ as unrealistic, but if you’re passionate about it, then you’ll find a way to do it. Some people have the 9-5 job, and they’re happy with that. But if you want to be a writer, you do that.

Not at the minute. Being between pseudonyms is one setback here. But soon!

They just… come to me. Whatever sounds good. I guess I just try not to make it sound boring.

The novel I’ve just submitted. I learned so much from writing it. It was the first thing I really felt happy enough with to submit to agents. I did so much experimental stuff in it, it was like a playground. It was a massive learning experience. I surprised myself with it. I guess every writer has fond memories of their “first” thing.

When I’d completed it… I felt exhausted. You put so much of yourself into things like this and I’d taken a whole year out to finish it. I put lots of bad and lots of good parts of myself and my life into it. Then I submitted this week to a couple of agents. It felt so real. I felt like crying. But it’s a really good feeling.

Sarah J. Maas. She writes YA fantasy. Her work has everything in that I like… plot twists, romance, action. It feels like it was written just for me. She’s not afraid of sex or gore, doesn’t shy away from harsher subjects. I recommend her!

I would accept that I’m a writer. Lots of people think they have to get a job first and then life gets in the way. I would go into things 100%. Family situations can be difficult if people don’t have support but I do think people make lots of excuses not to do the writing. Don’t get me wrong, it’s hard, and it takes a long time – I spent 8 months editing my novel 3 times. And you have to do it all yourself. The first time is the hardest.

Up until a few years ago, that was all I had in my head. I thought it was the “easiest way” to get my work out there. But then I had lecturers and tutors read my stuff and they were all asking me “why aren’t you trying, why aren’t you submitting this to agents and trying to get this published? You’re good enough.” But I definitely believe there are merits to both paths.

Be you. Write what you want. No matter how dark. Your emotions will come across in the writing. I’d say writing what you know and writing want you want are sometimes synonymous… and you’ll be surprised by the things that come out. But again, it’s therapeutic to write.

Manga is exclusively a Japanese thing, I think. When I was younger I would have been all “hell yeah!”, but now I definitely think that the novel form fits me best. The offer of writing a comic would be great, but I’m comfortable with writing novels. The other thing is I always get pegged as “that comic book person!”. It’s the same with video games… I’d love to write a video game, and if the opportunity came up? Great! But otherwise I’ll stick to novels for now.

If you want to be a writer, do it. I believe the “job” mentality can kill creativity. You know, people write and draw when they’re kids, teenagers, and then sometimes something just happens along the way to adulthood and people just lose that sense or part of themselves, like they think they have to grow up or something. That whole defeatist attitude about never being successful is a huge nope.